As the iconic movie “It’s a Wonderful Life” opens, we meet George Bailey, a banker who soon finds himself trapped under a boulder of challenging circumstances. Even though he has a wife, children, extended family, and friends who love him and would gladly help, he still feels trapped. At his lowest point, he feels like a failure and is ready to give up. However, help arrives in the form of a wannabe angel named Clarence. When given the assignment to help pull George out of his predicament, Clarence asks, “Is he sick?” The “boss angel” answers, “No. Worse. He’s discouraged.”

Discouragement! If we’re honest, we’ve all experienced it. We’ve felt its weight and know how mean it can be. Some of you may be there now. Unless we catch it early, it can dissolve our hope, weaken our faith, and erase our joy. Worst of all, it has the potential to damage our testimony. How can we prevent becoming a victim of such a powerful force?

Let’s take a close look at King David. David understood being overwhelmed by weariness and discouragement.  His arrogant son Absalom had turned against him and wanted Israel’s throne for himself. David hastily fled from Jerusalem to avoid being killed by Absalom’s men. Then, to add insult to injury, David’s wise and once-loyal friend Ahithophel betrayed him by siding with Absalom. Ahithophel boasted to Absalom, “I will catch up with him while he is weary and discouraged. He and his troops will panic, and everyone will run away.” (2 Samuel 17:2 NLT)

David mourned and cried over Absalom’s and Ahithophel’s betrayal. Yet, David recognized that he had a very powerful ally who always stood ready to help and had proven His faithfulness time after time. God could and would offer him the help he needed! “Oh Lord”, David prayed, “let Ahithophel give Absalom foolish advice.” (2 Samuel 15:31 NLT) God granted that prayer and gave David victory, but He also gave David an added, and perhaps unexpected blessing – a new friend. Hushai showed up at just the right time with just the right skill set to frustrate and counter Ahithophel’s advice to Absalom.

Our relationships with friends and family can become just as messy as David’s! Too many times when we’re bone-tired and undone, we’re tempted to let our mouths (or text messages) continue to run when they should simply take a rest. When we give in to temptation, we say things we regret and make our circumstances much worse. (At least that’s been my experience.) We might also be tempted to let negative thoughts about ourselves speak louder than God’s description of us. During times of discouragement, it’s easy to make a list of all the reasons we have to be discouraged. We often paint them onto giant billboards and erect them in prominent spots in our minds so they’re always in plain view.

We might look at David’s wise, prayerful reaction to his discouragement and think, “Yeah right, that was David. Of course he handled his discouragement well and achieved his victory, but, I’m not David!” If that thought breezed through your mind, hold your horses just a minute. Remember Ziklag?

Years earlier, before David ever became king, he was a young fugitive trying to escape the wrath of King Saul. Saul was so insecure and jealous of David that he wanted to kill him. Over and over, he forced David to run for his life. Twice, David had the chance to kill Saul, but he wouldn’t lay a hand on God’s anointed, even if it meant having to remain on the run.

Soon, however, David became weary and discouraged. He focused on the giant billboard in his mind listing all the times Saul had been angry with him. “David kept thinking to himself, ‘Someday Saul is going to get me. The best thing I can do is escape to the Philistines. Then Saul will stop hunting for me in Israelite territory, and I will finally be safe.’” (1 Samuel 27:1 NLT)

Perhaps David bought into the ancient proverb, “The enemy of my enemy is my friend.” King Achish of Gath and King Saul were fierce enemies. If David could ingratiate himself with Achish, then perhaps he could keep Saul off his heels. (As a side note: How ironic it is that David went to Gath, Goliath’s hometown, seeking asylum!)

David did eventually win the approval of Achish by lying and pretending to raid and plunder his own countrymen in numerous towns of Judah. Saying that he was attacking his own people established his loyalty to Achish. In reality, David was attacking the other enemies of Israel, namely the Amalekites. Whenever he and his men attacked a town, they took everything of value and left no survivors so that David’s lies would not be revealed. So, “Achish believed David and thought to himself, ‘By now the people of Israel must hate him bitterly. Now he will have to stay here and serve me forever.’” (1 Samuel 27:12 NLT)

King Achish gave David the town of Ziklag so that he, his men, and all their families could live there together. Having their own town outside the royal city allowed David to continue his covert operation. But then … the whole gang of Philistine rulers got into war with Israel. King Achish naturally expected David to join in the fight. Sadly, David agreed to do so.

I’d like to think David was still pretending. I want to believe that he was just buying some time to devise another scheme to get him out of the mess he’d made, but I’m not so sure. After all, his weariness and discouragement had led him to settle in an idol-worshipping land where he became a lying murderer and thief. We have no indication in Scripture that he was merely pretending to join the forces preparing to fight against Israel. If given enough time, weariness and discouragement leads to despair, and desperate people do desperate things.

Though David had won the favor of Achish, the other Philistine rulers were not convinced of David’s loyalty and insisted that he and his men be sent back home. Arriving back at Ziklag, they discovered that the Amalekites had burned their town to the ground and taken all of their women and children. David had desperately needed a colossal wake-up call, and this one rang through loud and clear! “David was now in great danger because all his men were very bitter about losing their sons and daughters, and they began to talk of stoning him. But David FOUND STRENGTH IN THE LORD HIS GOD. Then he said to Abiathar, the priest, ‘Bring me the ephod!’ So Abiathar brought it. Then David ASKED THE LORD, should I chase after this band of raiders? Will I catch them?’ And the Lord told him, ‘Yes, go after them. You will surely recover everything that was taken from you!’” (1 Samuel 30:6-8 NLT, emphasis mine)

Overcoming discouragement and finding strength in the Lord was a painfully long and unpleasant process for David that nearly ended in tragedy. Yet, David FINALLY answered his wake-up call and remembered where his help came from. If only he had stopped hitting the snooze button at the beginning of his struggle.

Perhaps, your current struggle might be your much-needed wakeup call. Be quick to relinquish the control you think you have. Give God time to work things out. He is faithful and always stands ready to give us the help we need.

As David’s son Absalom pursued and threatened David’s life, I have to believe that his memories of Ziklag were stirred. Those memories surely reminded him that his two greatest enemies had never been Saul and Absalom, but rather weariness and discouragement.

When clouds of discouragement begin to rain down on you, humble yourself, and ask for help. It does no good to have an umbrella and not stand under it. Resist the temptation to go it alone or to run away. Instead, cry out to the only One who has the power to help. Then, wait and watch as extra blessings come alongside you on your journey.

“I look up to the mountains – does my help come from there? My help comes from the Lord who made heaven and earth. He will not let you stumble; the one who watches over you will not slumber. Indeed, he who watches over Israel never slumbers or sleeps.” (Psalm 121:1-4 NLT) 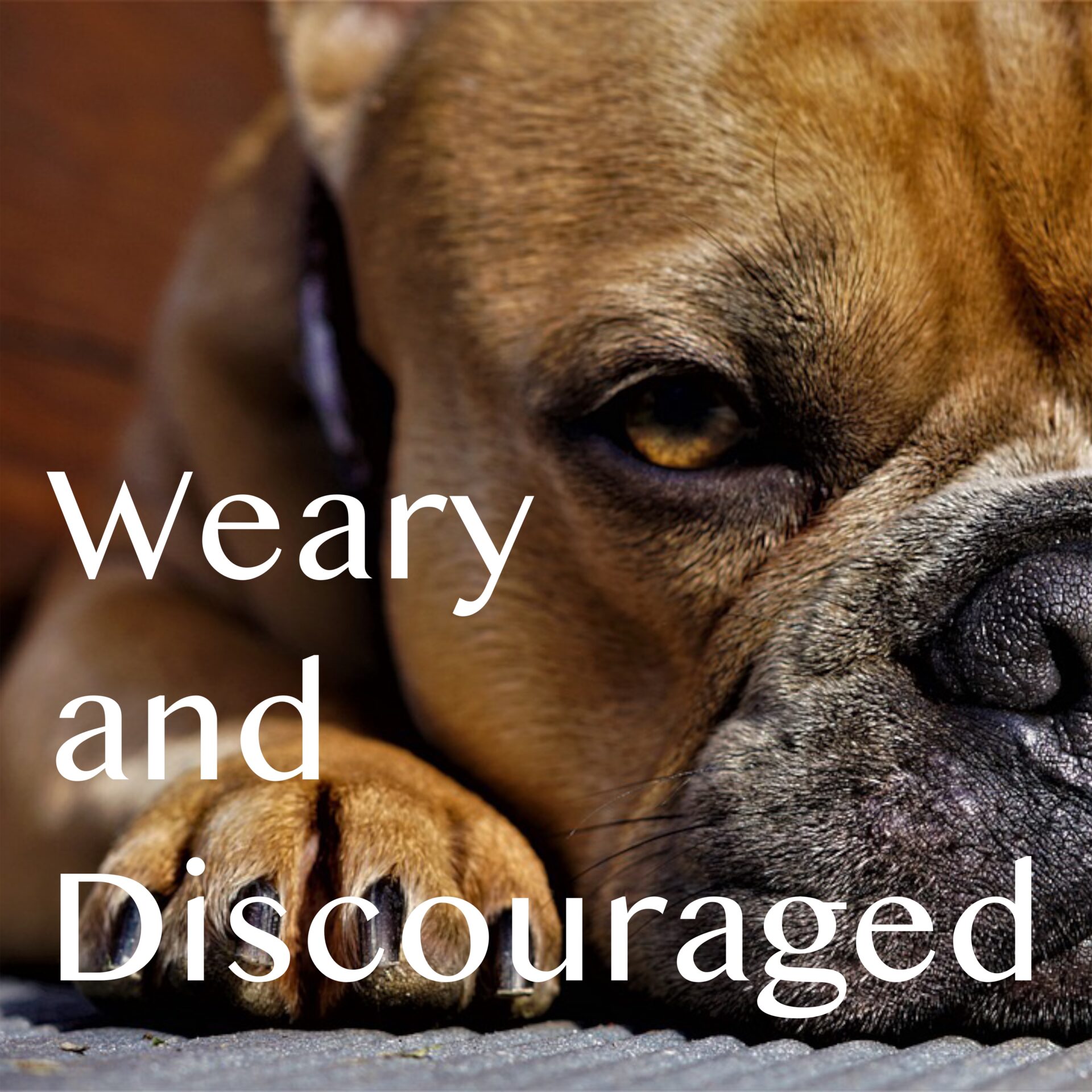