For these next few weeks leading up to Christmas we’ll focus on a few of the miracles of Jesus. This week I decided to rework an old post that I had so much fun writing. I love viewing familiar events from different perspectives. I pray this allegory helps you discover your own hidden meaning.

“The next day there was a wedding celebration in the village of Cana in Galilee. Jesus’ mother was there, and Jesus and his disciples were also invited to the celebration.” (John 2:1 NLT)

Friends and family from all around gathered for the festive wedding celebration. Jewish weddings were rich in tradition and lasted several days. Guests consumed much food and wine while upholding the sacred laws of the Torah.

To accommodate the extensive hand washing rituals, six hefty stone water jars sat dutifully amongst the festivities. However, as the celebration and hand washing continued, the water levels within these six weighty containers diminished, causing the jars to feel more and more useless and insignificant.

Before long, the six stone jars realized their emptiness as well as their inability to do anything about it. Each one wondered if they might ever experience a refilling of water. Better yet, they secretly longed to be filled with the wine that seemed to make hearts glad. Their work of water storing had been supremely important for centuries, but was there more? Could there be something even better?

The jars were the first to take note of the servant’s raised eyebrows upon overhearing the behind-the-hand whispers of a concerned woman to her Son. Her soft whispers were too soft to decipher at first. However, her unsettling message quickly blew into the ear of one servant after another. The unfolding situation caused complete panic in the frazzled servants trying their best to do everything exactly right.

The woman who first whispered the secret had arrived at the wedding celebration with her Son and a few of His friends. The Son, completely enveloped by a sweet, unfamiliar aroma now stood next to the stone-faced jars. Simply having Him near, warmed the jars from the inside out. That’s when they overheard the sad secret.

The jars had been around long enough to know how embarrassing this would be for such a fine family. An absence of wine created an absence of joy! And joy stood out as the hallmark emotion whenever a Groom marries His bride!

“Fill the jars with water,” the Son told the servants. Realizing they could find no better solution on their own, the overachieving servants not only replenished the water, but also filled the six hefty jars to the brim. Bewildered, the jars began to feel a powerful stirring as their water levels rose. They soon brimmed with an unexplainable newness. They realized there was something different about THIS water – something very different! The air dripped with a sweet, fragrant aroma.

The Son spoke up again, “Now draw some out and take it to the headwaiter.” Again, the servants, not knowing anything else to do, did as they were told. The headwaiter tasted it. Eyebrows flew up again! He wondered out loud why the very best wine had been saved for last.

The stone jars wondered if they’d heard correctly. Did he say, “Wine?” They expected a refilling of the same ritualistic water they had grown accustomed to. However, they never expected to be filled to the brim with the best wine ever! Not just one of them, but all six jars had been filled! More than enough for a celebration! More than they ever imagined!

The wine deposited its rich color on the inside of the jars as a permanent reminder of the celebration. From that day forward, no matter what anyone else tried to fill them with, they would remain confident that they had been changed from the inside out. They had done nothing to accomplish it on their own. It was the Son who had performed the miracle inside them. They resolved to stand together as a living testimony to the joy experienced when empty vessels, filled by the Son, become intent on releasing the sweet fragrance He provides.

“This miraculous sign at Cana in Galilee was the first time Jesus revealed his glory. And his disciples believed in him.” (John 2:11 NLT)

“Those who drink the water I give will never be thirsty again. It becomes a fresh, bubbling spring within them, giving them eternal life.” (John 4:14, NLT) 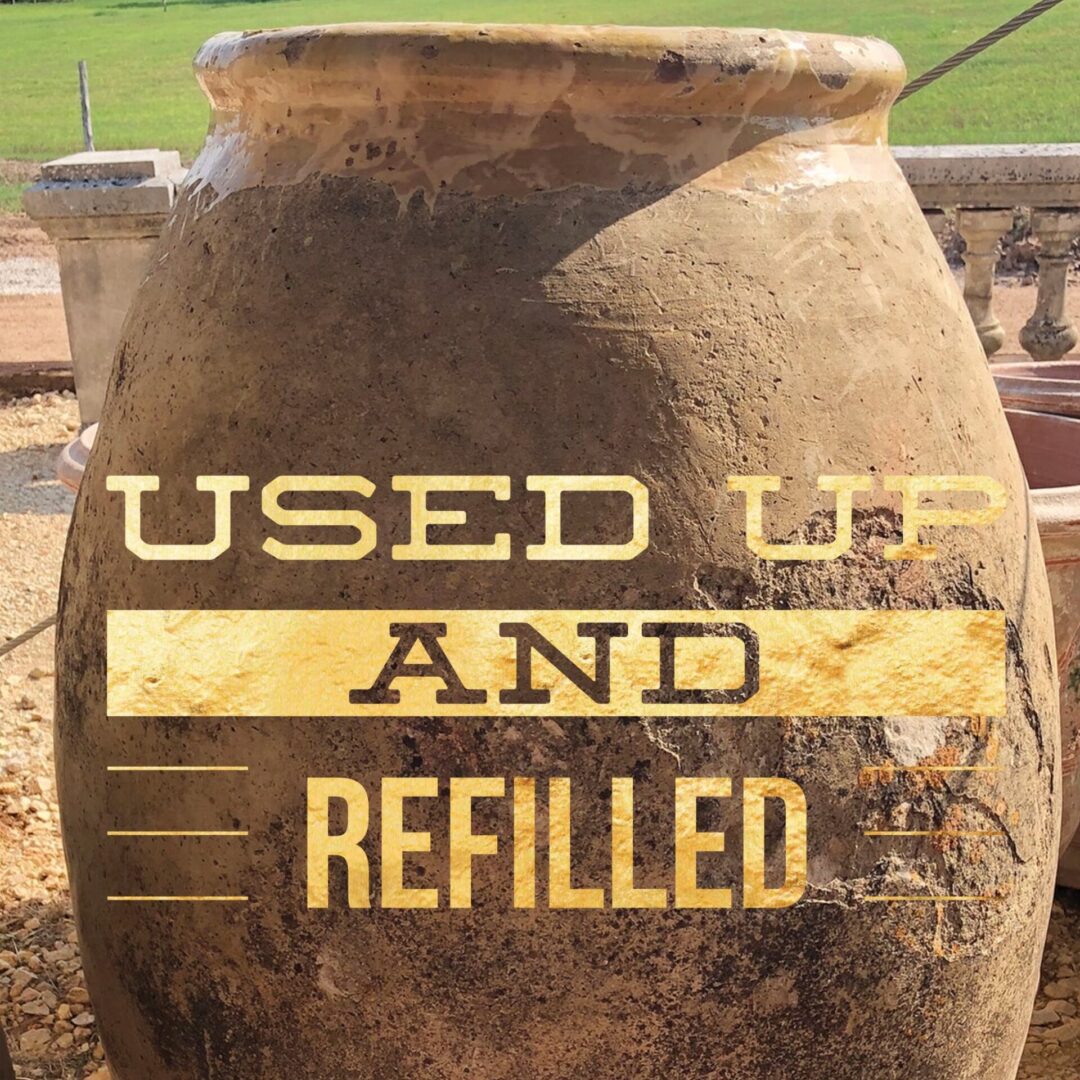