Relationships are messy, aren’t they?

Friendships help nurture us, but they can also be the sharpest knife that cuts the deepest, even among Christians. Most every woman you know could amen that and give you a much longer list of examples than a man ever would. However, if you’d rather not ask a woman and you’re still on the journey of Finding More, you could ask our friend Paul.

One of Saul’s (Paul) first friends as a new convert was Barnabas. We know him as the Son of Encouragement. Who better to step up and walk alongside a new Christian (or a freshly revived one for that matter) than one known as an encourager? Barnabas witnessed the former persecutor’s passionate proclaiming of Jesus in Damascus. Having that trust in Saul later paved the way for Barnabas to convince the Jerusalem disciples to accept Saul as a fellow believer. (Acts 9:26-27)

My insecurities would have wanted Barnabas to never leave and walk beside me forever. I’m afraid I would have viewed his later dispute with Saul and subsequent departure as rejection. Yet, God showed me that sometimes friends show up in our lives for only a season. They come with a specific purpose for a specific time, and then one or hopefully both of us move on. That’s just the way it works, and I’ve learned to be okay with that.

While Paul received the gospel from Jesus Himself (Galatians 1:12), he later visited with Peter and James to learn more about their time with Him. Years later in Antioch, Paul learned that Peter had become intimidated by those refusing to accept uncircumcised Gentiles as fellow Christians. Even Barnabas fell into this way of thinking. (Galatians 2:11-16) Because of the truth Paul knew and the relationship he had already established with Peter, he didn’t mind correcting Peter’s thinking. He did it boldly, not only for the sake of the Gentile believers, but also for Peter.

Sometimes, after asking the Spirit to guide us, we need to be the ones speaking truth to those we love who have given us permission to do so. This proves we always want what’s best for them. On the other hand, it’s become quite evident that I need to be willing to give that same permission to those who walk alongside me. When they lovingly correct me or point out my weak spots, I need to receive it graciously. When I become defensive, they are less likely to ever do it again, even when I need it most. After running their observations through the filter of the Holy Spirit, I can trust Him to help me make changes.

Most inspiring to me is Paul’s relationship with John Mark. Talk about messy! Mark, Barnabas’ young cousin, for reasons we can only speculate, decided to abandon Paul’s missionary journey and go back to Jerusalem. (Acts 13:13) Paul was not happy about that! In fact, he was so unhappy that when he and Barnabas decided to make a return trip to some of the churches they had planted, he refused to allow Mark to go with them. Barnabas, ever the encourager, insisted on taking him along. God used Paul and Barnabas’ disagreement to produce some positive results: 1) Barnabas and Mark went in one direction while Paul chose Silas to go with him in another. This doubled their efforts and spread the gospel faster. 2) Mark grew under the mentoring of Barnabas’ encouragement and later became an effective helper to Paul and the writer of the gospel of Mark. 3) Paul learned patience and the importance of mentoring young servants so that when Timothy entered his life he was fully prepared to mentor him well.

“As iron sharpens iron, so one man (or woman) sharpens another.” (Proverbs 27:17) In each of the last five decades, there has been that one friend in my life with whom sparks flew. Though I felt them flying, I failed to realize how each of them helped God sharpen me.

It took God using a recent chance meeting in the grocery store to trigger those old feelings of rejection. It had been a while since I let a trigger that powerful be pulled, but this time I knew I’d found MORE than enough to keep me from returning to the pit He’d lifted me out of.

First, I confessed my feelings to my husband because I knew I’d be acting weirder than usual until I processed everything. I didn’t want him to think he had done something wrong. (He’s much too kind for that.) He had known the frustration I’d felt for years over that friendship and a few others. Besides, confession is good for the soul.

Next, I poured out my heart to God. He knew as well as I did that things had become awkward with that old friend. Even though I knew she’d been a friend for only a season, I still had a few things to learn. I most certainly didn’t want to make those same mistakes with the new friends God had blessed me with. It took a couple of days, but time in the Word and the words the Spirit spoke to my heart revealed the root of all my friendship issues.

In those quiet moments, my spirit heard, “You’ve been so busy trying to earn the love of others, that you’ve missed the love you’ve already been given.” Immediately, the often-ignored, yet kind acts of several friends stood up tall in my mind. I had been quick to see all the ways they hadn’t met my needs, but I had not paid attention to the many ways they had. I believed I was incapable of meeting any of their needs. Life was still all about me. (As a side note, overcoming that self-centered mindset is the hardest thing for a recovering legalist to give up.) Self-centeredness was a hard-enough pill to swallow, but what I heard the Spirit say next hit the bullseye. More sternly than usual, I heard in my mind, “And that is EXACTLY what you’ve been doing with God! You’ve been trying to earn His love when you already had it!”

The last few years taught me the vanity of trying to pay my own way to heaven. I had known in my mind that Jesus had already paid my sin bill, but it took the sharp but sweet, convicting but forgiving, powerful yet tender friendship of the Holy Spirit to blow some fresh assurance into my heart. That breath allowed me to finally feel and receive the FREE love of God and the FREE grace of Jesus.

To give me a concrete example of His tender love and care, God gave me an amazing husband who has become my very best friend and who knows me best. But all of us girls know we need a female friend who shares a similar brain and hormones. God blessed me with one friend who has been constant in my life for the last eleven years. She’s walked this entire Finding More journey with me step for step and listened to more of my processing than anyone should ever have to. She faithfully held up a mirror for me when I needed to see my mistakes. Long ago, she told me that I couldn’t run her off, but it took a long time for me realize that she stays because she wants to – not just because she made a promise. She’s finally convinced me that she needs me as much as I need her. That gives me a tangible picture of God’s faithfulness and makes me feel secure.

This has not been an easy blog to write. It’s been personal and exceptionally embarrassing to admit. In fact, I tried several times to just move on to next week’s topic, but the Spirit refused to let me. I’m praying that God will use Paul’s example and my mistakes to help you make better friend decisions. Stepping out of the center and allowing God to take His rightful place draws us closer to Him and closer to each other. Whether our friendships last a day or a lifetime, each one is a gift from God to be treasured. Each one, whether easy or difficult, has something to teach us. Yes, relationships are messy, but oh, the joy that comes from the lessons they teach! Enjoy every friendship. Have no regrets. Life is short. 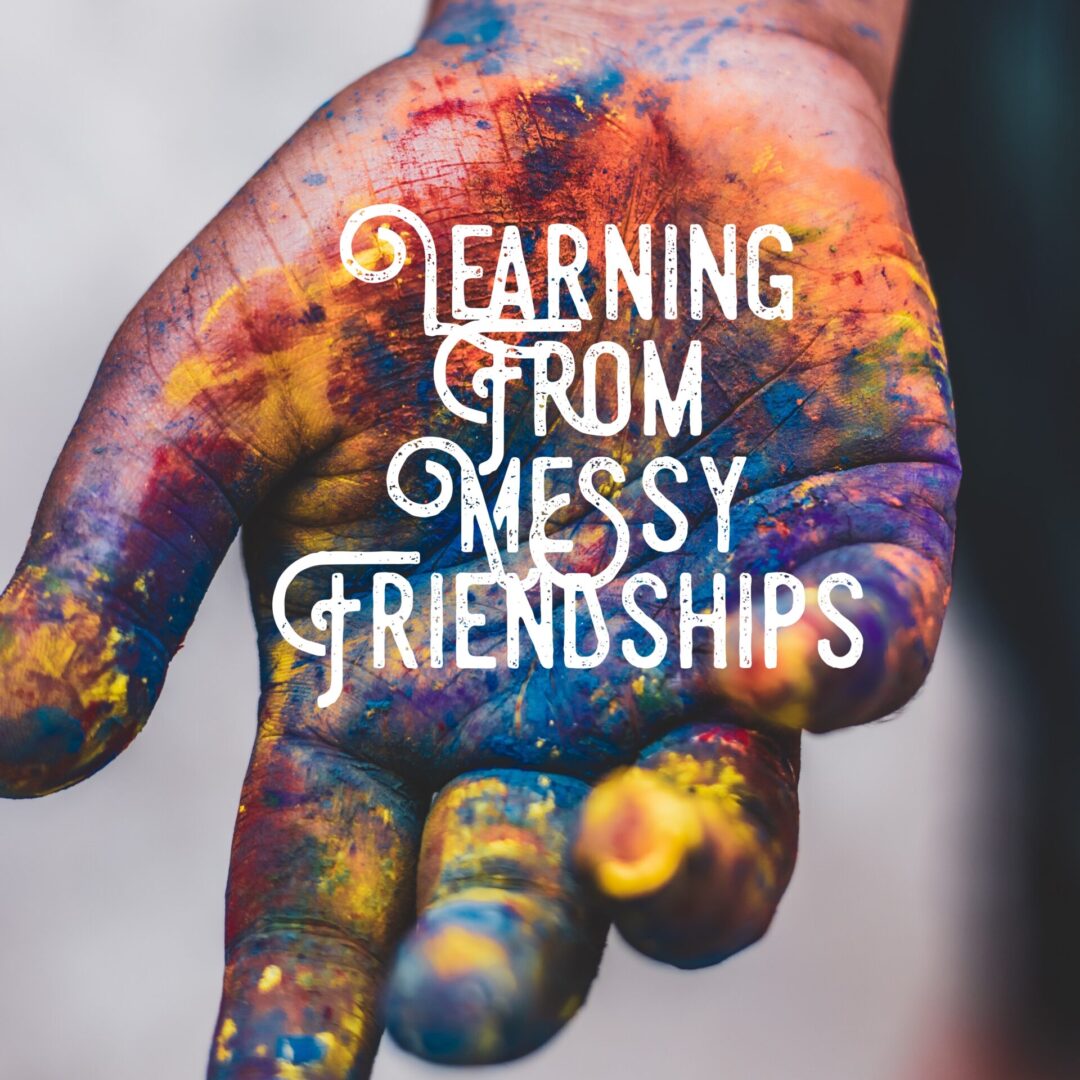